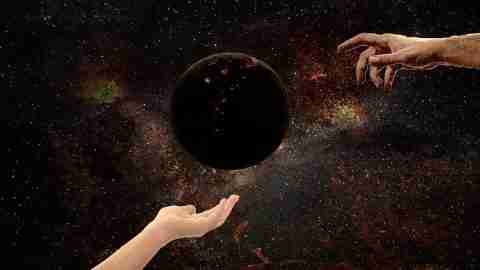 God created heaven and earth. He create light and dark, all of oceans and seas, the animals and finally man and woman.

We are created by God in His image for his purposes. He loves us and wants the best for us if we are willing to seek Him and follow His rules.

In the beginning God created the heavens and the earth. Now the earth was formless and empty, darkness was over the surface of the deep, and the Spirit of God was hovering over the waters.

You have been created by God, in His image, regardless of whether or not you know it, and He LOVES you.

“In the beginning, God created the heavens and the earth.”

The Book of Genesis (Hebrew meaning “in the beginning”) is the first book of the Bible and says that God created the universe in six days, then rested on the seventh day. It doesn’t say how he did it, other than he ‘spoke’ it into existence.

It doesn’t necessarily explain how long it took and this has been the subject of debate for countless centuries. From the very start, we are invited to take God at His word, by faith.

On Day 1, God created the heavens and the earth. The earth was covered by water.

On Day 3, God created dry land and and gathered the waters into one place, the oceans. Then he created vegetation, seed-bearing plants and trees.

On Day 4, God said ‘let there be lights in the vault of the sky,’ and he created the sun, to illuminate the earth by day. He also made the stars, to give light by night and to separate light from darkness.

On Day 5, God created the creatures of the sea and the birds of the air.

On Day 6, God created land animals, and directed them to reproduce according to their kind. God said “Let us create man in our own image, in our likeness.” On Day 7, God rested.

The Bible is not a science book.

The Bible is not a science book, but we can see from Genesis that all creatures reproduce according to their kind. Horses do not reproduce with Tigers. Within a kind, animals can reproduce, such as crossing a donkey with a horse and getting a mule. Charles Darwin offered an hypothesis in the mid n1800’s that creatures evolved. Darwin said that man descended from apes.

The Bible says that all creatures were created by God, individually, and that man held a very special place in that creation. Scientists argue both for and against evolution, but it is strongly believed by many that evolution is scientifically impossible. Could God have used evolution to create man? No. Because God created man in his own image, on purpose, by design, not by trial and error.

Genesis is the basis for the entire Bible.

The Book Genesis is the basis of the entire Bible, the very foundation from which all of human history is based. The Creation account is important because it shows that God did everything on purpose, for a very specific reason. This is important because we were created in His image, making us the prize of His creation.

As you continue in the Book of Genesis, you will discover that each story, each small piece of human experience, is essential to the rest of the Biblical account. Read carefully and you will see that Genesis will tell the story of God’s unfolding for mankind. It’s depth is endless and understanding the Creation will help makes sense of everything else that is to follow.

Jesus in referenced at creation as the Word and referenced throughout the Bible. Jesus was there at the beginning.