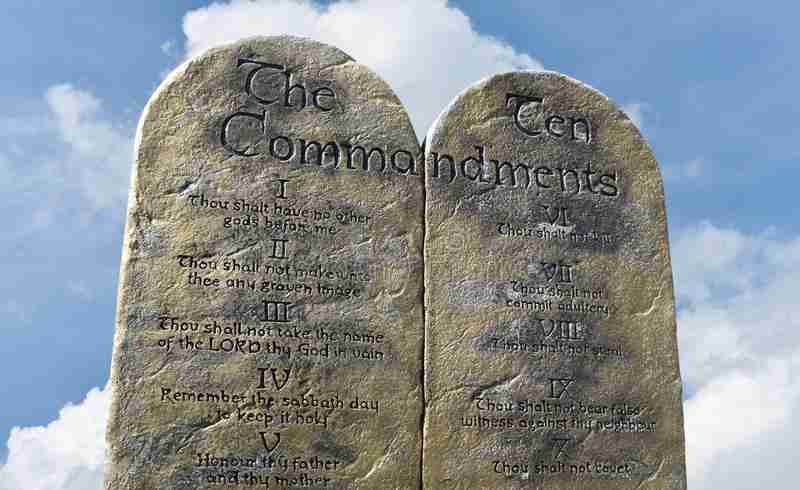 God brought the Israelites out of bondage in Egypt in 1446 BC, and immediately gave them the rules to follow to have a moral, well functioning society even as they lived in the wilderness for forty years. Moses went to the top of Mount Sinai and God inscribed the tablets with the Ten Commandments.

The commandments are the rules that God wanted the Israelites and all of us to follow.

Here are the Ten Commandments from the King James Version of the Bible:

1. Thou shalt have no other gods before me.

2. Thou shalt not make unto thee any graven image, or any likeness of any thing that is in heaven above, or that is in the earth beneath, or that is in the water under the earth: Thou shalt not bow down thyself to them, nor serve them: for I the LORD thy God am a jealous God, visiting the iniquity of the fathers upon the children unto the third and fourth generation of them that hate me; And shewing mercy unto thousands of them that love me, and keep my commandments.

3. Thou shalt not take the name of the LORD thy God in vain; for the LORD will not hold him guiltless that taketh his name in vain.

5. Honour thy father and thy mother: that thy days may be long upon the land which the LORD thy God giveth thee.

7. Thou shalt not commit adultery.

8. Thou shalt not steal.

9. Thou shalt not bear false witness against thy neighbour.

People have debated the meaning of these commandments for centuries. Some regard them as a rigid set of rules and regulations, while others describe them as suggestions. Most would agree, that they are a set of morals that we all should follow to live a joyous and free life.

If we love God, then we will want to follow His commandments. God, as our creator, knows what is good for us and striving to follow these commandments helps us to live well.

The Ten Commandments are the perfect set of standards one must adhere to in order to gain entrance into heaven. Disobeying the commandments is how sin is defined. If we covet what our neighbor has, we are sinning. If we worship false idols or prophets that is also sin.

Jesus knew, of course, that nobody can keep them, we as fallen humans are not able to avoid sinning and breaking the commandments. He also knew that only perfection would be allowed in His Father’s kingdom.

That is why we needed Jesus, our Messiah, to be willing to die on the cross and rise on the third day for us. His death and resurrection allows us enter into God’s kingdom with our sins covered by the sacrifice of Jesus. It all starts by understanding God’s law as outlined in His Ten Commandments.

Judaism is defined by the commandments

The Commandments were given to the Israelites, three weeks after their exodus from captivity in Egypt, the beginning of Judaism was taking shape. God directed Moses how worship was to be done, sacrifices to be made and from those original Ten Commandments, 613 individual laws were established.

The prophets over the ages would warn the people when they were falling away from God. After God gave Israel the commandments in the desert, the rest of the books of the Old Testament describe Israel’s disobedience. The Bible outlines a long history of Israel turning to God, turning away from God and then turning back again. The relationship between man and God was formalized.

Because it was not possible to keep the commandments, God established a system whereby people could offer a sacrifice, a substitution shedding of blood to cover their sins.

Before fleeing Egypt, the first Passover was established. The people were instructed to take a perfect lamb, a first born, male, without blemish from the flock. God was very specific about this. The sacrifice was made. The blood was painted on the doorposts of houses and angel of death would pass over the house.

This became a yearly ritual. The shedding of blood to cover sins. It was the same thing that God did in the Garden of Eden, when He killed an animal and gave the skins to Adam and Eve to cover themselves. It was a foreshadowing of the ultimate sacrifice, Jesus, for all who believe.

God said He would write His commandments on our hearts. That is, for those who chose to follow Him, the Law is something to be embraced, a goal of heavenly perfection, shrived for our of love and desire to belong to God.

Ten Commandments give us a mirror into our lives

The Ten Commandments can also be like a mirror. By embracing the commandments men and women can look at themselves and see the truth of their lives. It is a warning system, reminding people to turn back to God and rekindle their relationship. It is a way for man to see the Holiness and perfection of God.

Because perfection is required for heaven, and because people are incapable of reaching that perfection, it becomes obvious that what separates man from God is man’s sin. Man’s debt for that sin cannot be repaid. It is impossible. Because of sin, man does not deserve heaven, can’t earn his way to heaven and cannot buy his way into heaven.

Jesus and His Resurrection redeem us from our sin

The penalty of sin leads us to the major point of the Bible—the Lord Jesus Christ. God loves us. He does not desire that we should perish. But He is Holy and perfect and the price for sin must be paid, otherwise He is a liar.

Rather than sacrificing man, God chose to sacrifice His own Son. The ultimate purpose of the Ten Commandments is they point the way to the Messiah.

The Ten Commandments, often overlooked as a lesson for children, are so much more. They point to Christ. They bind us to God. They are meant for the glory of the Lord Jesus Christ.