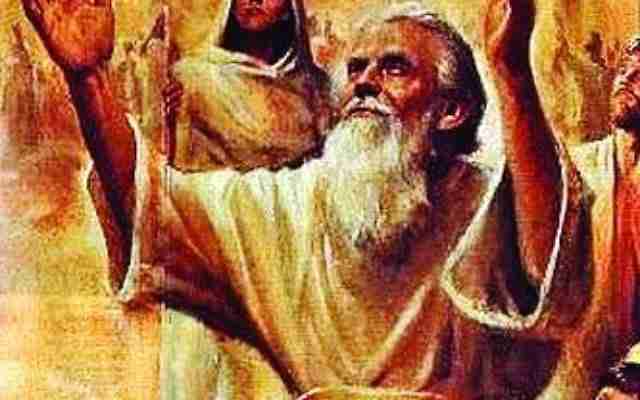 Perhaps there is no more enigmatic a figure in the Bible than Enoch. We know very little about him, other than he was a descendant of Adam. He appears in Genesis, very briefly, and is gone.

The Bible says he was “taken up” to heaven and did not experience death, which brings us to an interesting piece of speculation. Does Enoch have a job to do for God?

Some have speculated that the two men in the Bible that did not experience death, but were taken up into heaven, Elijah and Enoch, are the two prophets mentioned in Revelation 11. They testify and are immediately killed.

Their bodies are left out for public display and scorn. For three and a half days they lay there in the street, but God breathed life into them and they got up. The onlookers are terrified when they see this sight. God calls out, “Come up here,” and the two are taken into heaven.

We do not know this to be fact, but logic informs us that God always has a purpose for everything He does, so the two men might be God’s instruments during the tribulation to make a display of His power.

The important thing to say about Enoch, and there is not a lot said at all about him in Genesis 4, is that he walked in FAITH with God. He was the son of Cain, who built a city and named it after Enoch. He was the father of another famous, but mysterious Biblical character, the priest Methuselah, who lived to be the oldest person ever at 969 years.

Enoch was also the great grandfather of Noah. He lived 365 years.

God ALWAYS has a purpose

God never does anything by accident, or without purpose. This is sometimes difficult to understand, but it certainly applies to Enoch. Little is said about him, little is known, yet after a brief mention in Genesis, he is mentioned in Hebrews. Why?

He also is mentioned in Luke, but only as it relates to lineage. In Jude he is mentioned as a prophet. In Hebrews, however, he is referenced because of his FAITH. Therein lies the heart of the matter. Enoch is mentioned not so much by what he did himself, but because he had FAITH.

Enoch did not keep silent about the sin around him. Jude says Enoch prophesied about those evil people:

“See, the Lord is coming with thousands upon thousands of his holy ones to judge everyone, and to convict all of them of all the ungodly acts they have committed in their ungodliness, and of all the defiant words ungodly sinners have spoken against him.”(Jude 1:14-15, NIV)

According to Genesis 5:23, Enoch’s life-span was 365 years. Throughout those years, he walked in faith, and that made all the difference. No matter what happened, he trusted God. He obeyed God. God loved Enoch so much he spared him the experience of death.

For before he was taken, he was commended as one who pleased God. And without faith it is impossible to please God, because anyone who comes to him must believe that he exists and that he rewards those who earnestly seek him. (Hebrews 11:5-6, NIV)

What happened to Enoch? The Bible gives few details, other than to say:

Such terminology is not typical of the Bible and implies that Enoch did not die a natural, physical death. He was taken up by God so that he was no longer present on earth. Only one other person in Scripture was honored this way: the prophet Elijah. God took that faithful servant to heaven in a whirlwind (2 Kings 2:11).