Father, Son and Holy Spirit are the three persons of the Trinity. For years it was “Holy Ghost,” but that changed in the last 50 years or so. God’s Holy Spirit is one of the great mysteries of the faith and more often than not misunderstood and under appreciated.

Jesus was fully MAN and fully GOD. He set aside his deity and came to us as a servant, but the accounts of his life are filled with amazing healing, turning the water into wine, walking on water, etc.

Did Jesus the MAN do this, or was another person at play in all of these remarkable moments? When he read from the scroll of Isiah in the synagogue and spoke the words,

“The Spirit of the Lord is upon me,”

who was He referring to?

Certainly with a snap of his fingers Jesus could have done anything He chose to do, but that’s not how things happened. Jesus the MAN was completely subservient to His Father. Jesus the MAN derived all of His power from the Holy Spirit, to give all of the glory to God. He didn’t even want people to say who did the miracle. The point is He wanted His followers to understand that they could do the same through the power of the Holy Spirit. All credit to God.

The Holy Spirit works in many ways

The Holy Spirit takes on Kingdom work in a variety of ways. It is the power of the Holy Spirit that convicts us of our sin and gently guides is to salvation in Christ. The Holy Spirit informs, instructs, and most of all reveals all truth.

“Don’t you know that you yourselves are God’s temple and that God’s Spirit dwells in your midst?”

The Spirit illuminates. Believers often tell of not being able to understand a passage of Scripture, but suddenly, out of nowhere, comes understanding and insight. That’s the Holy Spirit.

The Holy Spirit helps us to do God’s work

The Holy Spirit also gives special gifts to people to do God’s work. Some can preach, or play music, or teach, or just have the gift of hospitality that reaches out to others. The Spirit works quietly and sadly people OFTEN miss God’s presence. It’s not like the Holy Spirit announces Himself, rather He works in the background, suggesting, guiding, nudging a believer along.

The Holy Spirit works to soften the hearts of people, pointing out their frailties and pointing them to Christ. Absent the presence of the Holy Spirit, man would be devoid of conscience. That little reminder that something you are about to do is wrong is not an accident.

The Spirit renews the minds of believers, gives them new perspectives, strengthens their faith and forever seals their relationship with God the Father.

The study of the Holy Spirit is an endless task, but a very satisfying one. Who better to turn to if you want to understand the nature and character of God?

The Holy Spirit waits your invitation to guide you to new understanding, new hope and new assurance. Jesus, the man, did not perform miracles. The Holy Spirit did. 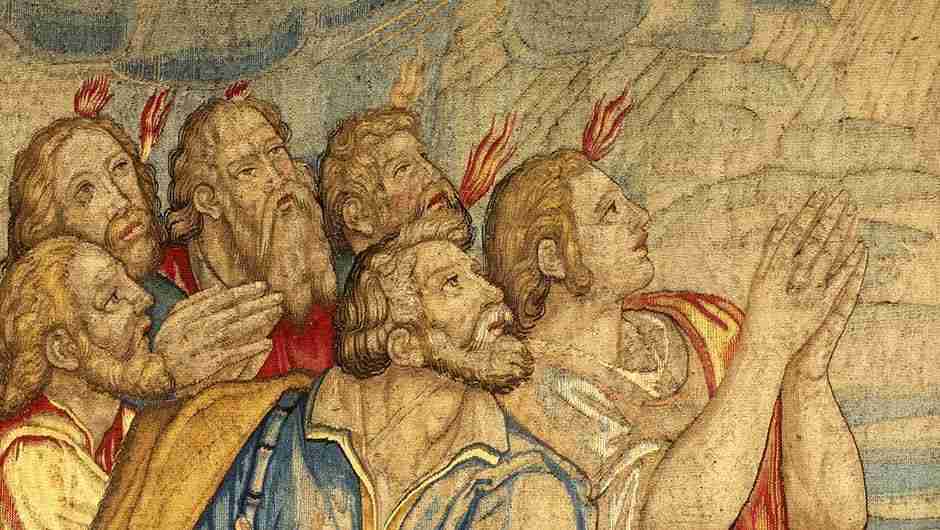 The disciples, now Apostles, were together in Jerusalem. They needed to select a replacement for Judas Iscariot, who betrayed the Lord and subsequently killed himself. The choice was between Barnabas and Mathias, both had been with Jesus. Mathias was chosen.

As they gathered, God’s Holy Spirit came to them, just as Jesus had promised. They heard a sound like a blowing wind that filled the entire house where they were meeting. Things that looked like tongues of fire came and rested on their shoulders. Each of them was filled with God’s Holy Spirit.

Suddenly they were all able to speak in other languages, as the Spirit enabled them. The Apostles would travel out of the city and share the good news.

The coming of the Holy Spirit opened a new chapter in the lives of believers, as God was now personally available to anyone who needed wisdom, guidance and comfort. Jesus promised a counselor and He made good on His promise.

The work of the Holy Spirit, through the Apostles, would cause exponential growth in the faith. When Jesus was crucified, His real followers were few, but through the Apostles, the whole world would hear the story, a story that is still being told today all around the globe, in hundreds of languages.

Through the guidance and encouragement of the Holy Spirit, men and women have been able to create a written language for people who never had their own words written before. People still hear the word in their own tongue.

19 I will show wonders in the heavens above and signs on the earth below, blood and fire and billows of smoke. 20 The sun will be turned to darkness  and the moon to blood before the coming of the great and glorious day of the Lord. 21 And everyone who calls on the name of the Lord will be saved.’”

Because of the resurrection of Jesus, man’s relationship with God has been changed forever. It is now personal and intimate. Not a distant, angry, foreboding God, but our Father in heaven who loves us and wants the best for us.

The Holy Spirit, the counselor that Jesus promised, is a wonderful teacher. The Spirit brings illumination to things you may never have understood, or gives you ideas or thoughts that you otherwise would ignore.

The same Holy Spirit that Jesus called upon for help is available to all of us today.

The Apostles were badly shaken at the crucifixion, amazed at the resurrection and both saddened and troubled when Jesus ascended to Heaven. Still afraid of being arrested or killed, they were living out of the public eye, not doing what they were charged to do by Jesus before He left.

But Jesus had promised a counselor and that is what happened in that house to all of the Apostles on that day.

From then on, a new boldness would take over and they would begin to preach the Gospel to all nations, beginning in Jerusalem. Peter spoke to a crowd of people, from many nations, people who spoke many different languages, but each hear in his own language.

Peter spoke, likely in Aramaic, but each person heard in his own tongue. It was like each person had their own, personal interpreter.

People marvel at the miracles of Jesus and they should because healing the sick and all that happened during His ministry was of supernatural power. However, Jesus, while here on earth, was fully man.

He gave up His divinity and power to live a human life, subject to all the limitations of the human condition. His power came from the Holy Spirit. It was the Holy Spirit that healed the sick and raised Lazarus from the dead.

Jesus was always obedient to the will of His Father and all that was accomplished was done in accordance with His Father’s will.

Sometimes people say a singer or preacher is anointed. We talk of “God-given” abilities That is the work of the Holy Spirit.