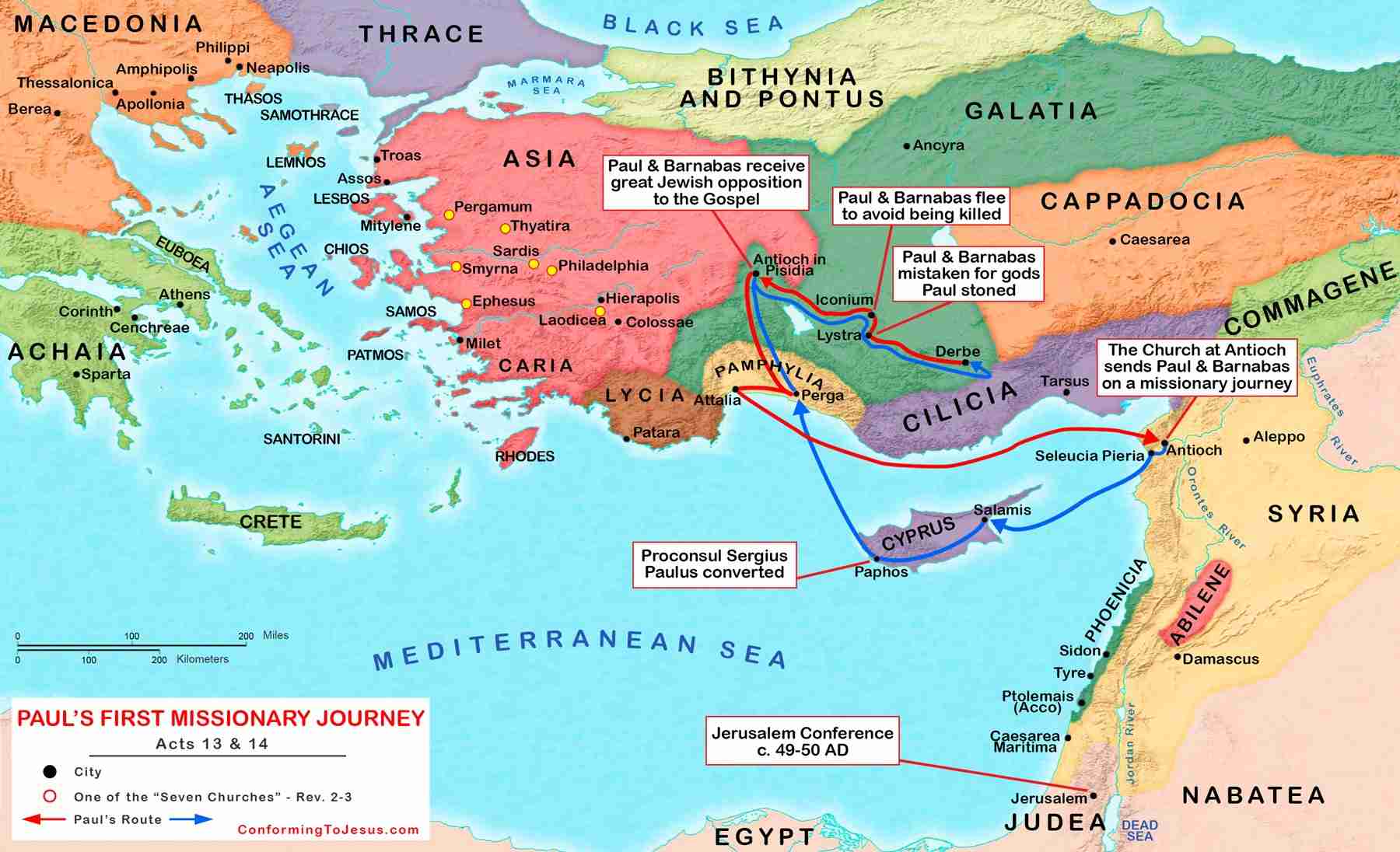 Paul and his associate, Barnabas, set out on their first missionary journey to reach the Gentile world. They traveled from town to town and preached the good news to the people. They went into synagogues to speak to the Jewish people as well.

Paul and Barnabas were a good team, but had disagreements. Barnabas wanted to have John Mark join the team, but Paul disagreed.

Barnabas would then take his young protege with him, and Paul selected Silas to continue his missions. Later a young man named Timothy joined Paul.

Paul, Barnabas and John Mark traveled to Cyprus to visit synagogues. They encountered a false prophet named Bar-Jesus who worked for the proconsul (Roman overseer). Paul rebuked the false teacher.

The proconsul ordered that Paul and Barnabas be brought to him so that he would hear more about Jesus. There the false prophet tried to turn the proconsul away.

Paul was filled with the Spirit and Bar-Jesus was blinded. This caused the proconsul to see the power of God. He converted to Christianity.

Then they went to Perga in Pamphylia. John Mark decided to go back to Jerusalem. Paul and Barnabas went from there to Pisidian Antioch. The Jewish authorities were not amused and out of jealousy removed them from the city.

They moved on to other cities, starting churches. Paul healed a crippled man while in Galatia and some people thought the two missionaries were gods. The two proclaimed Jesus Christ to correct the wrong statements.

Paul and Barnabas had planted churches during their first missionary journey. Upon his return there were men preaching that Gentiles must first be circumcised in order to serve with church leaders. Paul and Barnabas traveled back to Jerusalem, first, to get this matter settled.

Paul’s troubles were not over, as he and Barnabas had a disagreement over whether or not to have John Mark accompany them on the trip.

John Mark was with them on the first tour, but left them and Paul was not happy about it. It was decided that Barnabas would take John Mark on their own trip, and so Paul invited Silas to go with him.

The purpose of this trip was to follow up on these new churches and support the ministries of the leaders.

The churches in Galatia, Corinth, Phillipi, Thessalonica and Ephasis, would be the inspiration of support letters that would later be included in the New Testament.

By the time Paul set out on his third missionary journey, he had already established many churches. His purpose was to shore up these churches and encourage the members. Much of his time was in Ephesus.

He had visited Antioch, so Paul went through Galatia and Phrygia, with the intent of strengthening his brothers and sisters in Christ. His third missionary journey lasted from 53 to 57 A.D. and is found in Acts chapters 18:23-21:14.

Paul was inspirited and was guided by God to preach to the Gentile world. Everywhere Paul went he established churches. He would stay for a while, preach the Gospel and teach the faith.

He would follow-up with leaders of the churches by sending letters. These letters would be copied, read aloud in the churches, and given to others.

These letters, called the epistles, make up much of what would later become the New Testament and are still used to teach, encourage and bring people closer to God.

Paul’s missionary trips are reported in the Bible in the book of Acts, and are important because they bridge the movement from a small, Jewish community of believers, to the hugely expanded Gentile Christian church.

For this is what the Lord has commanded us:

“I have made you a light for the Gentiles,
that you may bring salvation to the ends of the earth.”

“Therefore I want you to know that God’s salvation has been sent to the Gentiles, and they will listen!”

Paul, the once murderous Pharisee, who wanted to arrest and kill every Christian, was now the most influential voice in the movement, bringing the message of salvation to the Gentiles.

He spoke with kings, the intellectual elites and the general public. His teachings have been influential in every culture and every time period since they were first written.

Paul did not immediately set out for other countries to preach the Gospel. Rather he took time to study and learn, preparing himself for what would be a difficult challenge.

After preparing himself, he then set off to reach others. Like Jesus, Paul and Barnabas were a threat to the Jewish leaders, as the news of Jesus of Nazareth was very upsetting to the religious elites.

Unlike the other Apostles, Paul was a Roman citizen. Because of that he could not be abused or summarily jailed without a proper trial.

He was given the opportunity to reach out to not only the Jewish authorities, but the secular authorities as well.

Because he was a scholar, Paul was able to converse with the intellectuals in each place. He understood their religions and their beliefs. He had the good sense not to challenge those beliefs, but to share his own. He was a master communicator.

The John Mark mentioned in their first trip and was the author of the Gospel of Mark.