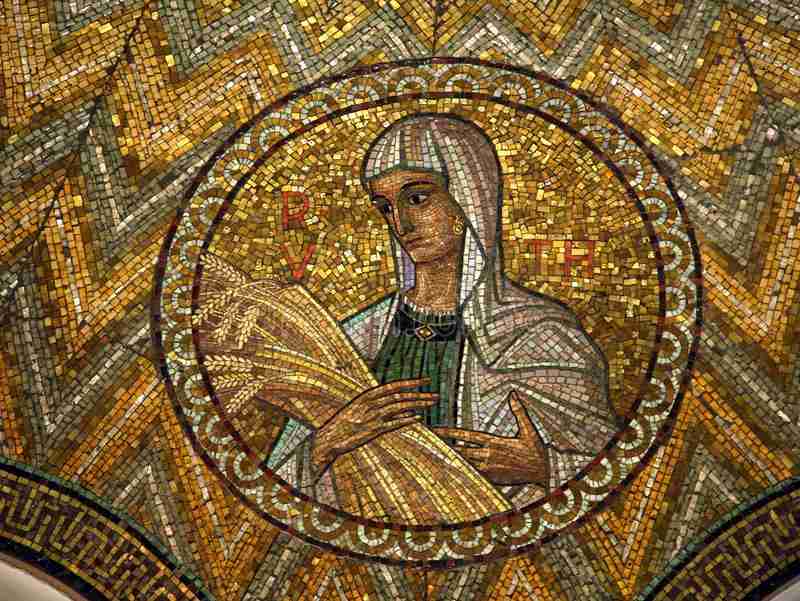 Ruth lived in the time of the judges, before Saul was crowned Israel’s first king. The country was very divided, as people turned away from God. The journey through the wildness, the exodus from Egypt and the amazing acts of God were still very much in the contemporary memory.

There were the threats of foreign enemies, but Ruth’s story occurs during a time of peace between Israel and Moab (southeast of Jerusalem). Her story is about devotion, in particular Ruth’s devotion her her mother in-law, Naomi.

Ruth’s story helps us get a better understanding of the way in which God’s will is carried out. He works His will through the actions of everyday people. Ruth’s faithfulness not only is a blessing to Naomi, but also a blessing through the family of David, leading to the Messiah, Jesus.

The book of Ruth in the Bible is interesting because God is not mentioned very much at all. In the Book of Esther, for example, God isn’t mentioned once. Another very interesting fact is that Ruth is a Gentile, a Moabite but a direct descendant of Jesus.

Naomi was married to Elimelech and had two sons. There was a famine in Judah, so Elielech took his wife and two sons from their home in Bethlehem, to live in Moab, which was southeast of Jerusalem.

The sons were Mahlon and Kilion. While there they married Moabile women, Oprah and Ruth. Elielech died, as did the two sons. The three widows were alone.

Naomi heard the the Lord had ended the famine, so she decided to return to Judah. Naomi did not expect her daughters in-law to go to Judah with her, and told them to stay in their own, saying:

Oprah returned home, but Ruth stayed with Naomi. She said “Where you go I will go and your God my God.” Interestingly, they were going back to Judah, to Bethlehem, and Ruth, the Gentile, made a deliberate and conscious decision to follow the God of Abraham, Issac and Jacob.

When they arrived they had nothing. Naomi had a relative through her marriage to Elimelech, a man named Boaz. He was a man of standing in the community and had fields. Ruth decided she would ask if she could glean the fields after they had been harvested.

She spoke to the foreman, who went to Boaz to discuss it. Boaz was moved and told Ruth to join the other servant girls who worked in the fields. Boaz further instructed the men not to touch her.

Ruth asked him why she had been given favor, after all, she was a foreigner. Boaz told her that he had heard of her kindness to Naomi and how she had left her own home and family to be with Naomi. He would, later marry Ruth.

Ruth married Boaz and they had a son, Obed. Obed would later marry and have a son Jesse. Jesse would have several sons, the youngest being David, the future king of Israel.

From David is a direct bloodline to Mary, the mother of Jesus. Ruth, therefore is David’s great grandmother and a blood relative of the Messiah. Ruth, a Gentile, leads us to Christ. Who knows, had Ruth not been loving and faithful to Naomi, she never would have met Boaz.

But God, using the course of human events to His purpose, makes this remarkable story about a widowed Moabite woman, whose family would change human history.

What is a kinsman-redeemer?

The kinsman-redeemer was a male relative. He would have, according to their laws and traditions, the right to act on behalf of a relative who needed help, in this case Naomi and Ruth. He is one who would rescue or deliver.