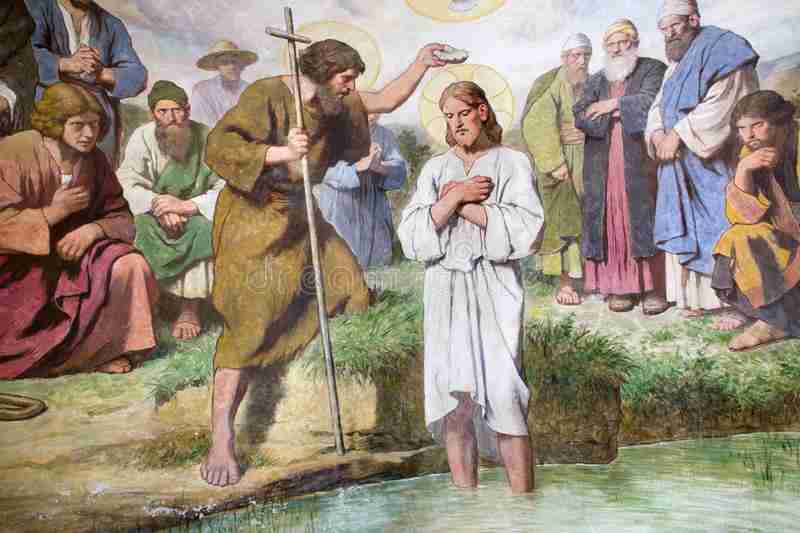 John the baptist had been preaching in the wilderness for several months. Jesus was just beginning his public ministry. He had been living in Nazareth with his mother and earthly father Joseph, working as a carpenter.

When it was time for him to begin his public ministry, it was necessary to go to John, whose ministry would soon come to an end. He met John at the Jordan River and was baptized.

John foretold of Jesus, who would now begin to usher in the Kingdom of God.

Jesus did nothing out of impulse. It was all by design. It was all in obedience to God, His Father. People heard the preaching of John and were hearing the message. Jesus, although fully God, was also fully man.

Therefore, he would do what others did in submitting to baptism. John was actually taken by surprise and said that Jesus should, by rights, baptism him. Jesus declined and said He would be baptized to fulfill all righteousness. In front of the people, Jesus was baptized.

29 The next day John saw Jesus coming toward him and said, “Look, the Lamb of God, who takes away the sin of the world! 30 This is the one I meant when I said, ‘A man who comes after me has surpassed me because he was before me.’ 31 I myself did not know him, but the reason I came baptizing with water was that he might be revealed to Israel.”

Baptism is important because it is a public confession of faith in the Lord Jesus Christ. Matthew writes that people should be baptized in the name of the Father and of the Son and of the Holy Spirit. Jesus, is our high priest, and as a man, he was obedient.

Jesus does not ask anything of us that he is not willing to do himself. Interestingly, Jesus was baptized as an adult, a believer. He was not baptized as a baby, but taken to the Temple to be presented for circumcision.

John had been out in the wilderness, preaching to the people about the need to repent and turn to the Lord. His preaching was fiery and often offended the religious authorities. John even rebuked the king, an offense that would later cost him his life. But John was preparing the way for the Messiah, and boldly proclaimed Jesus as the promised savior.

John was reluctant to baptize Jesus, telling Jesus that he should be the one to baptize him. Jesus told him to proceed and submitted to the baptism. John knew that his ministry must decrease and that Jesus was one the people should follow.

This was the changing of the guard, the handing of the torch. John had foretold of the coming Messiah, and now Jesus the Messiah was here with us. It was the beginning of Jesus’ public ministry… the ministry that would change the world.

John the Baptist was Jesus’ cousin and six months older. John was the son of Elizabeth, who was either a cousin or an aunt to Mary.

John was a kind of miracle baby, as Mary and her husband Zechariah, a priest, did not think they could have children. But God had other ideas. John, in obedience, would be the man God used to tell people of the coming of the Messiah.