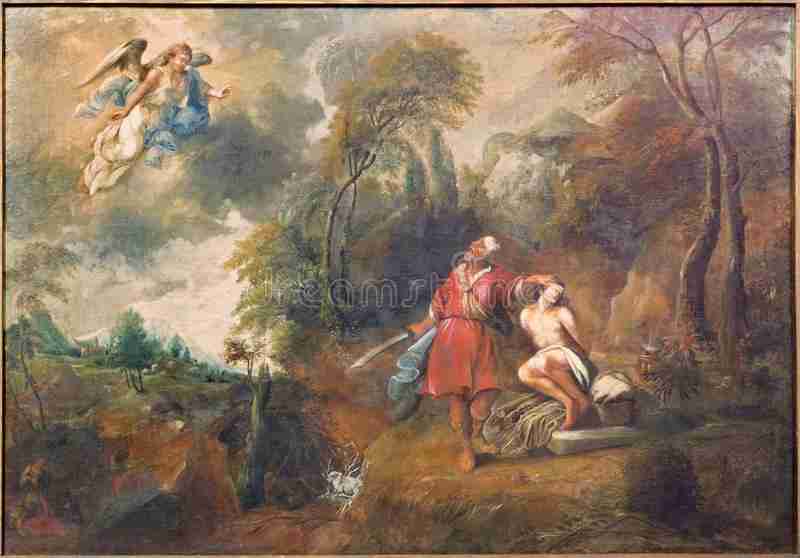 God asked Abraham to sacrifice/kill his son Isaac, Abraham obeyed and then spared Isaac right before his father killed him.

Abraham is the Father of the chosen people of Israel and he is the first in the linage to Jesus Christ. Sacrificing Isaac is foreshadowing for the death and resurrection of Jesus, 2054 years before it happens.

Then God said, “Take your son, your only son, whom you love—Isaac—and go to the region of Moriah. Sacrifice him there as a burnt offering on a mountain I will show you.”

Why It Matters To You

When we are obedient to God, we, like Abraham, will receive God’s favor. Because God loves us He was willing to sacrifice His only son for us, but in His mercy spared Abraham’s son Isaac.

After the flood the world is repopulated. God promised that he will not bring about another flood. But human nature had not changed and soon man was once again turning began away from God. It was time for a more formal relationship, so God looked for another good man, just as he had with Noah. He chose Abram. Abram and his wife Sarai had no children.

God told Abram to pack his things and move, but didn’t tell him where. Abram did as he was told. God said “I will make you a great nation…” Abram, Sarai and Abram’s nephew Lot all left together.

Abram was a good man, but the important thing here is that he said “yes” to God, and by faith left his home country for an unknown destination. He went through Egypt and eventually settled in Canaan. Lot would go his separate way.

God promised Abram and Sarai that they would have a son. But both of them were advanced in years and when the promise was made Abram was already 75. Sarai suggested that Abram go to their maidservant Hagar and have Hagar give him a son. It’s not what God promised, but Abram took her suggestion and Hagar gave birth to Ishmael.

God then told Abram that he would be the father of many nations, and renamed him Abraham. Sarai became Sarah. The problem was that Ismael was not the son God promised.

God had promised Abraham that his offspring would be like the the stars in the sky. Abraham was amazed because they had no son and Sarah was old, well beyond child-bearing years. But when Abraham was 100 years old, Sarah gave birth to Isaac. God kept his promise. Issac was that son. Isaac was the chosen son, from whom a great nation would arise. Abraham sent Hagar and Ishmael away.

Abraham told to kill his son

But one day God told Abraham to take Issac to Mt Moriah and offer him as a sacrifice. Although this was difficult request, Abraham obeyed God, packed up wood and provisions and left their home, with Isaac.

When they got to Mt Moriah, Isaac was confused and asked his father where the lamb would come from for the sacrifice. Imagine the horror in Abraham’s mind. Here is his beloved Isaac, the promised son, and God wanted him to kill his beloved boy?

In obedience to God Abraham places Issac on the alter.

Abraham built an alter, tied up his son and laid him there, helpless. He took out his knife and was ready to strike when an angel of the Lord told called out from heaven and told him to stop.

The angel told him that he knew Abraham feared God, because he would not withhold his own son. God provided a ram, who got caught in a nearby bush, to be the sacrifice. They offered the sacrifice and went home.

An essential to understanding the significance of this account is that Abraham said “yes” to God. He was obedient. For this reason alone, God credited Abraham’s actions as righteousness. Forget all of his faults and shortcomings, because he said “yes” he was considered righteous. That would later become an extremely important point.

Abraham trusted God, had faith that God would care for him and did as God instructed. This is a foreshadowing of the greatest sequence of events in human history. God stopped Abraham from killing Isaac, but God would later turn his back when His own son would be offered on the cross to die.

What You May Not Know

Because God chose Abraham and promised him that he would be the father of race of people (Israel), we are able to follow the complete linage of Abraham to Christ specifically for 2054, making the Bible almost completely irrefutable because of the depth and accuracy of the information.