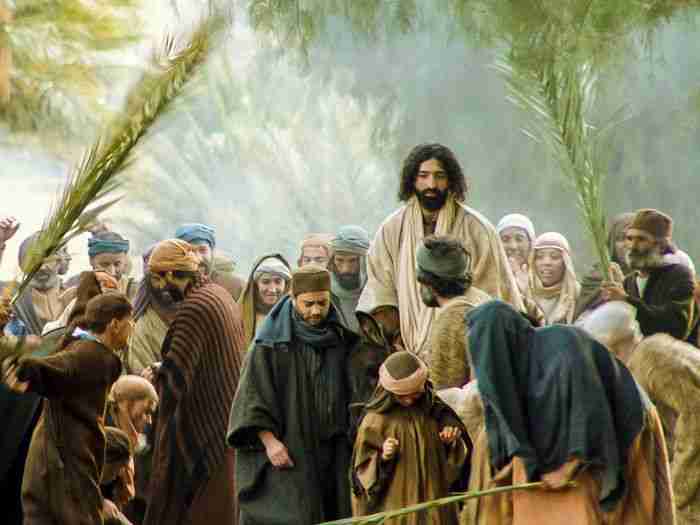 It was the time for the Passover, so Jesus and His disciples went to Jerusalem. The reception Jesus received was grand indeed, as people spread palm leaves and cloaks over the rode as He entered. The large, cheering crowd welcomed Jesus, who immediately recognized the sadness of the moment and as He approached Jerusalem, He wept in sorrow.

He knew that the city would come to ruin because they did not recognize God’s coming to them personally. By 70 AD the temple would lay in ruins, as the city was completely overtaken by the Roman army.

For a short moment, during a very busy week in Jerusalem, Jesus was greeted as a king. Caught up in the emotion of the moment, people worshiped the Messiah’s entry into the city. This would all change too quickly.

His entry illustrates His true standing as King of Kings and Lord of Lords, but the emotional reaction is shallow, like the adulation for a movie star or celebrity.

What matters here is the truth of who Jesus was and is, something that got lost in the shuffle as the events of the week progressed. His entry was triumphant, but by the end of the week, He was tried, beaten, dragged through the streets of the city, and crucified.

37 When He came near the place where the road goes down the Mount of Olives, the whole crowd of disciples began joyfully to praise God in loud voices for all the miracles they had seen: 38 “Blessed is the king who comes in the name of the Lord!” “Peace in heaven and glory in the highest!”

Interestingly, there were people who greeted Jesus like a rock star of His day and were excited upon His entry into the city, but many of those same people turned their backs on Him in just a few, short days.

Bowing to the political will of the religious authorities, they went from cheering His entry into the city to shouting for his crucifixion. The truth didn’t matter. They got caught up in public opinion and were easily swayed. People today are not any different.

Just as crowds had gathered across the country to see Jesus, they were waiting for Him at the gates of Jerusalem. For those who regarded Him as the Christ, there was cheering and the spreading of palm leafs on the path where He rode into town on the back of a colt.

Shouts of “Hosanna” (acclimation and praise) greeting Him along the way. The triumphant entry did not escape the eyes of the Jewish elite. They wanted Jesus arrested and prosecuted, as they considered Him a huge threat to Jewish laws and traditions.

The Romans were actually not that interested prosecuting Jesus, as long as there was law and order and no disturbances. When Jesus went before the governor Pontius Pilate, the Roman leader could find no fault with Jesus, under Roman law.

But the Jewish elite insisted that Jesus be found guilty. Pilate tried to avoid the miscarriage of justice by offering to let the crowd choose between the criminal Barabbas and Jesus. The crowd chose to have Barabbas go free and shouted for the crucifixion of Jesus.

It was customary for Jews to go to Jerusalem for the Passover and visit the temple to make their sacrifices. The city would swell in population during the week.

Passover was a great opportunity for merchants to make money, selling doves and animals for sacrifice, or changing money at the temple for people who came from distant lands. The commercialization of Passover angered Jesus, who in a fiery rebuke, overturned the tables of the money changers.

In much the same way today, the commercialization of Christmas has all but taken out the true meaning of the birth of the Messiah.

The events of the Passover week were watched carefully by the religious authorities, as any disruption of business would be an expensive inconvenience. They gave His disciple Judas Iscariot 30 pieces of silver to identify Jesus and help the guards arrest Him.

Even though Jesus attracted crowds, His appearance, according to the prophet Isaiah, was ordinary. Because He didn’t stand out, they needed someone to identify Him for the authorities.